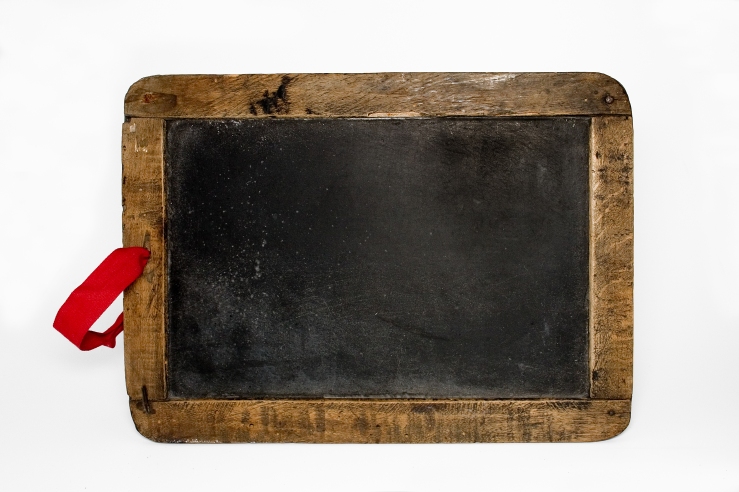 One of the common phrases we hear around New Year’s Eve and Day is the opportunity many take to “start with a clean slate.” The reference is to the slate students used (like a mini-blackboard – or now we have whiteboards!) before paper was readily available. They’d do their arithmetic sums on a piece of slate (like shale) then wipe it off to do more. Mistakes were easily erased, so they could start again—with a clean slate.

As I was musing on the clean slate, I thought about “the clean plate club” many parents use to try to motivate their children to eat all the food (especially vegetables!) they’ve been served. My dad used to promote this concept with me, and also with our children, his grandchildren. A clean plate meant we were grateful for our blessings, especially considering the needs of starving children around the world. (Pretty heavy stuff for a four or five-year-old…).

Clean plate and clean slate sound similar, but they have very different emphases.

The clean plate club is well-meaning, but misdirected. It imposes guilt and pressure.

The “Clean Slate Club” I’m suggesting does just the opposite. The clean slate club removes guilt and pressure.

Many of us live so continually with a burden of guilt (see my recent “Thriver’s Guilt” blogs) that we hardly know what it’s like not to feel guilty. Jesus gave his life so we could break from bondage to sin and guilt.

By faith, God’s love for us in Jesus Christ erases the slate of charges against us.

Therefore, there is now no condemnation for those who are in Christ Jesus, because through Christ Jesus the law of the Spirit who gives life has set you free from the law of sin and death (Romans 8:1-2 NIV).

And there’s these reassuring verses from Psalm 103:

…[The Lord] does not treat us as our sins deserve

or repay us according to our iniquities.

For as high as the heavens are above the earth,

so great is his love for those who fear him;

as far as the east is from the west,

Corrie ten Boom, author of The Hiding Place (about her’s family’s courage in hiding Jews from the Nazis) said it this way:  “Bury your sins in the deepest part of the ocean and hang a sign there that says, ‘No Fishing.’”

But a clean slate is not just a New Year’s thing.

A clean slate is not even a new-morning thing, even though I heartily celebrate Lamentations 3:22-23

Because of the Lord’s great love we are not consumed, for his compassions never fail. They are new every morning; great is your faithfulness.

A clean slate is moment-by-moment thing.

In spiritual direction, I find one of the greatest barriers to experiencing God’s presence is focusing on our failures and shortcomings. Because our minds naturally focus on just one item at a time, focusing on our sins (both of omission and commission) takes our attention from God’s grace and goodness.

I continually remind myself of the practical wisdom of Brother Lawrence (whose given name was Nicholas Herman and is also known as Lawrence of the Resurrection). Following his death in 1691, the abbot of his monastic community compiled his letters and notes in a booklet treasured by many, The Practice of the Presence of God. Abbe Joseph de Beaufort recalled of Brother Lawrence:

[That] when an occasion of practicing some virtue offered, he addressed himself to God, saying, “Lord, I cannot do this unless thou enablest me;” and that then he received strength more than sufficient.

[That] when he had failed in his duty, he only confessed his fault, saying to God, “I shall never do otherwise if You leave me to myself; it is You who must hinder my falling, and mend what is amiss.”  That after this he gave himself no further uneasiness about it.

So, I invite you to join the Clean Slate Club. By faith in Jesus Christ, live in the freedom and joy of God’s holy eraser.